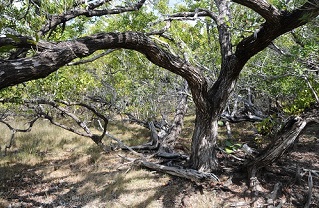 Florida has many endemic and imperiled species and ecosystems vulnerable to climate change, urbanization, and other stressors. UCF researchers in the Biology Department are exploring options for maintaining these species and ecosystems in the face of warmer temperatures, sea level rise, and changes in rainfall patterns, in combination with land-use change related to a growing human population. Three of these ecosystems are represented here.

The pine rocklands ecosystem is restricted to the Miami Rock Ridge (which includes part of the Everglades) and the Lower Keys, areas at high risk from sea level rise and storm surge. These ecosystems are fire-dependent and contain many rare species. In the Lower Keys, highly imperiled species include the Key deer, Lower Keys marsh rabbit, wedge spurge, and Big Pine partridge pea.

The buttonwood forest is the most inland of the mangrove communities, often occupying an ecotone, or transition zone, to the adjacent upland community. This ecosystem is prime habitat for the endangered Lower Keys marsh rabbit. They are threatened by changing rainfall patterns, sea level rise, and increased storm surge.

The UCF Biology team, in collaboration with researchers at University of Florida, Florida Natural Areas Inventory, and Valdosta State University, is currently engaged in: